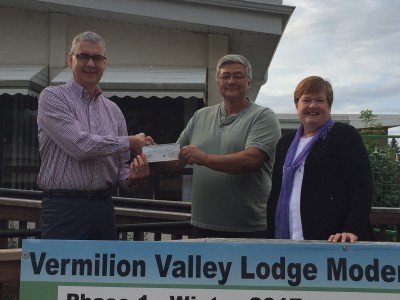 On behalf of the Vermilion Elk’s Club, member Greg Young presents Craig Brown and Sheri Heller with a $5,000 donation to the Vermilion & District Housing Foundation for the Living Well Modernization Project. The modernization project will be replacing the three oldest wings of the lodge, the dining room and kitchen, which was originally built in 1960. The current structure has 84 suites, ranging from 150 to 280 sq. ft. in size, and no longer fit the Government of Alberta’s standards to senior access. The new building will include 52 new, 350 sq. ft. rooms, which will each have a small kitchenette and walk-in shower. Of the 52 rooms, four will be one bedroom couple’s suites for a total of 124 rooms and a maximum of 130 residents.

Thank you to the Vermilion Elks for your support.